It was the year 1992 and Lana and I were serving at her home church in Cumberland RI, Blackstone Valley Baptist Church, with pastor Robert Lewis. I was serving as a youth and assistant pastor at the time after graduation from Baptist Bible College East in 1988.

Backing up a little, in 1983 I came to know Jesus by listing to the radio. I knelt down by my bed one Friday night and recited the sinners prayer. God wonderfully changed my life and I began looking for a church. It was on a cold Sunday night that I walked into the Sanford Bible Baptist Church in Sanford ME. I began to learn more about my faith at the church and was baptized the following summer. It was through the church that I learned about Baptist Bible College East in Boston MA and because I felt called to preach I went there to Bible college the following year.

Lana grew up in Woonsocket RI in a Catholic family.  Through family and friends she was invited to Blackstone Valley Baptist Church and began to ride the bus to church every Sunday. She accepted the Lord when she was thirteen and soon began going to Christian School. It was there that she felt called to become a missionary to England and she went to Bible College in Boston after graduation High School.

Sometime in 1991, a Romanian couple came to our church and I befriended them and began to learn about Romania. Louis asked me to come on a trip with him that he was taking to visit his relatives.  I had the opportunity to visit Romania in the summer of 1992 and witness first hand the door that was open in this former communist country.
Lana and I had thought we would start a church in New England but God had other plans and after much prayer and reflection we surrendered to go to Romania.

At the September meeting in 1992 Lana and I where approved as missionaries through the Baptist Bible Fellowship. Elizabeth, our first daughter was born in 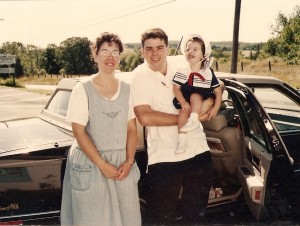 October 1992 and 11 days later we where in our first missions conference.

God blessed our deputation and we where able to raise our support in a little over 18 months. We had originally intended to go to Oradea, in the North West part of Romania but through God’s guidance he let us to the city of Constanta, the second largest city in Romanian on the Black Sea Coast.
We arrived in Constanta in August 1994 and missionary Stephen Crane picked us up at the airport and brought us back to the city of Constanta.

We jumped right getting accustomed to our surround, learning the language and the culture. Romania was just 4 years removed from t

he revolution that overthrew their dictator. The transitions was just starting to pick up steam buy in many ways we were faced with the remnants of the former communist ways.

I can remember how long it took to get our first car registered, to obtain our visas and find milk and eggs on the holidays.  The first week we were there, the hot water was turned off for more than two weeks.

The first time I was stopped by the police was another learning experience.  They wanted to take away my licence and they read to me from the law book and told me all the bad things they could do to me. I realized later that this was a tactic to help extract the maximum compensation from me.  Fortunately, I has some New Testaments in the car and when I gave them to the officers, they only made me pay half of the fine because I had given them the New Testaments!

I never would of imagined growing up in Maine where I thought that going down to Rhode Island was going south that God would bring us across the ocean to a new mission frontier, but I am glad he did and am ready for the next journey in our lives.