Our goal when we arrived on the field was to learn the language and then work on starting the church, but as it worked out we were able to do both at the same time. After being on the field for only two months, a businessman from Florida contacted me because he was coming to Constanta to show the Jesus film in two movie theaters.  After he showed the film, I stood up and invited anybody that wanted to know more about the Bible to come to the cultural house the next Sunday where I had rented a room.

I can still remember the nervousness and anticipation that I felt. I had a young many named Cristi to interpret and a young 7 year old girl to play the organ. We had around 70 that first service and God gave us the grace to get though it. 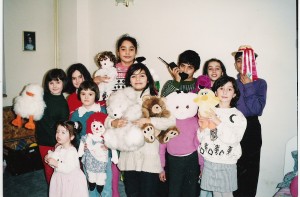 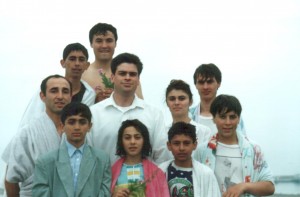 After a few weeks, the people that came for the free Bibles disappeared and we were left with a group of kids and a few adults.  We then began a children’s class to go along with the service and during the week began to have discipleship lesson with the people that were faithful.

town. We began to work with the people we had, pass our tracts and invite people to church. God began to bless. We had our first baptism in the spring of 1995.  It was from there that thing really began to take off.

In 1998 God lead us to purchase a house that we where able to renovate and make into a church building.  It was such a great blessing to be out of the rented building, that sometimes would double book so when we came on Sunday the hall would have another 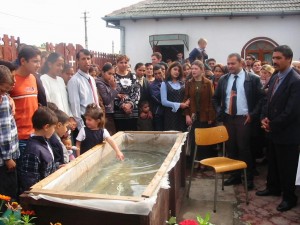 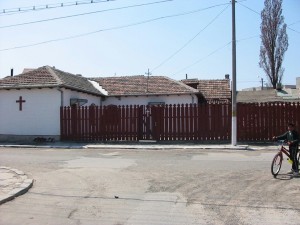 It  was also during this time that we started our first village work in the village of Biruinta. It is a village about 30 KM outside of Constanta. We also worked with another missionary at the time and helped him start two churches in the villages of Amzacea and Topraisar.

The renovated house was a great blessing but it was also very small. We would fit about 120 people into a building that would normally seat about 50 comfortably. We bean to pray for a property where we might be able to build a building.

Pastor Karl Skinner of Battlefield Baptist in VA called me during the Christmas of 2001 and said he was sending us 25,000 to buy a piece of property. We were overjoyed and began looking for the right place.  God lead us to a piece of property that we were able to purchase for $24,000.  God in his sovereignty knew the right timing because within 8 years the property had increased in value over 10x.

It was 2004, after we had drawn the plans to build the church that I came down with a sickness that no doctor could figure out what I had. I had to come back to the states and was diagnosed with Sarcoidosis.  By God’s grace after we came home the symptoms began to dissipate and I was able to recover. During this time, pastor Skinner had give us a 50,000 matching fund so we could build the building. I was able to go to the churches and raise the matching 50,000. 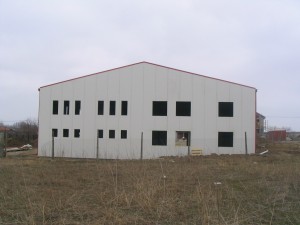 When we returned to the field we received the final approvals and we began to pour the foundation for the church. We put up a metal structure that took only a month to put up. It took us however over two year to finish the inside and all the class rooms. There where many supporting churches that sent teams to help with the construction. Also the men of the church donated their time faithfully to help us get it done.

We praise God that when we left for furlough in 2013 we were able to leave behind a national pastor and a debt free building.  Anchor Baptist Church continues to go forward and grow, despite the fact the we have seen over 60 percent of the membership leave the country to seek work in other places.  Yet God is using this to help spread the gospel in other European nations. Please continue to pray for the churches in Constanta.